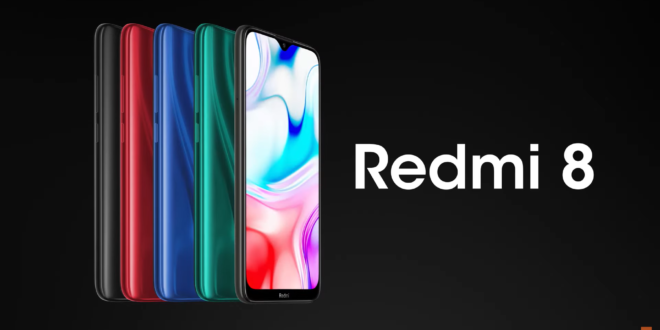 The Redmi 8 brings a fresh and newer Aura Mirror design language. This design is also expected to be the design for the much-awaited Redmi Note 8 lineup which is to debut in the coming week in India. The body of the phone is made up of Polycarbonate and comes in 3 colors, namely – Sapphire Blue, Ruby Red, and Onyx Black.

Featuring an impressive 5000mAh battery, the Redmi 8 is already a full-day phone. Whilst the 18W Fast Charging sweetens the deal even further, along with – a Type C port, Gorilla Glass 5 and P2i Splash proof coating. It also does come with two dedicated SIM slots instead of hybrid ones and features a dedicated SD card slot.

The Redmi 8 will be going on sale for Rs.7,999 and Rs.8,999 for the 3+32GB and 4+64GB variants respectively. However, Xiaomi is doing a promotional sale for the first 5 million users. These 5 million can get their hands on the higher variant for the price of the lower one. Xiaomi stated that the official reason is that they are celebrating being at the No.1 spot among smartphone brands for 2 consecutive years.

As far as we see it, the Snapdragon 439 chipset is somewhat a let down on an otherwise good entry-level phone. It seems more so when you consider that Redmi 8’s predecessor had a much more powerful Snapdragon 632 chipset. With a Type-C USB port and Fast Charging, the phone is otherwise a good entry-package into the Android smartphone ecosystem.

So, should you get it? The answer to that really depends on two things –

Should you find yourself in the first category, the answer is a definite – “Yes”. Although if you fancy yourself some specifications, you are definitely in the second category and the answer is obviously to find something else. If you do not happen to be bothered by old gen phones, then the Redmi Note 7, which received a permanent price cut recently should be your go-to option.

For other value for money options check out our article on “Best Smartphones under Rs.10,000”.

Shraman is an aspiring blogger, a gadget and smartphone geek, and a motorcycle enthusiast. He dreams of starting his own motorcycle and travel blogs and tech youtube channels someday.
@http://twitter.com/ac1dgp
Previous Apple iPad mini 2019 Review | Zero competition
Next Google Pixel 4 Updates | Release Date, Price, and leaks.