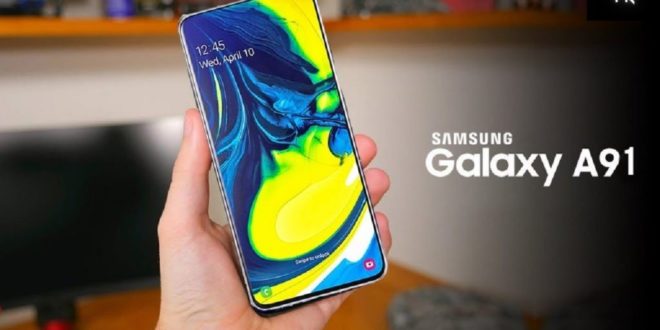 Though Samsung announced the A90 5G just last month, it appears that its replacement is already on its way. The Samsung Galaxy A91 (SM-A915F) will deliver the same core specs. Those are – a 6.7-inch Infinity-U screen, a Snapdragon 855 chipset, and a 4,500mAh battery. Although it will charge much faster with 45W fast charging. A noticeable change is the absence of 5G compatibility, which should result in a lower starting cost.

Around the back, the A91 is rumored to house the same 48MP f/2.0 main camera. A second 12MP ultra-wide sensor is present instead of the 8MP camera found on the A90. The third camera is likely to be a depth detector. The front camera remains at 32MP but comes with a slightly quicker f/2.2 aperture.

The Galaxy A91 is expected to be part of Samsung’s 2020 Galaxy A-series lineup. As such it may not release until next year. There is no pricing data yet, but some sources suggest that the A91 could be launched in countries like India by the end of this year.

According to the details collected, the Galaxy A91 (SM-A915F) features a Qualcomm Snapdragon 855 processor with 8GB of RAM and 128 GB of storage. It also allows the expansion of microSD up to 512 GB. All of this is the same as the Galaxy A90 5G. This is also the case with its 6.7-inch Full HD+ Infinity-U screen.

Connectivity choices include Bluetooth 5.0, USB Type-C and Wi-Fi a/b/g/n/ac. it doesn’t have any support for 5G. The battery capacity is the same at 4,500mAh, but unlike the Galaxy A90 5G, the Galaxy A91 can allow 45W of fast charging. That being said, it remains to be seen whether it will come with this charger in the box or whether Samsung will have us purchasing it separately as it does for the Galaxy Note 10+.

It was recently reported that the Samsung Galaxy A91 is being built with Android 10 on board. It means that the phone will run Android’s latest iteration out of the box. If that were to be the case, next year it won’t be released before the Galaxy S11. The Galaxy S flagship is always the first device to feature the latest OS update. That’s until Samsung decides that he doesn’t want to do that anymore.

There have been some unconfirmed reports that the Galaxy A91 could be launched in countries like India before the end of this year. It is confirmed that the Indian version is being produced with Android 9 Pie. So even if it comes out, it’s not going to run Android 10.

Mobile Arrival is an aspiring blogger, a gadget and smartphone geek, and a motorcycle enthusiast. He dreams of starting his own motorcycle and travel blogs and tech youtube channels someday.
Previous Android 10 now rolling out to Huawei Mate 20 Pro
Next Android 10 Update Roadmap released by OnePlus