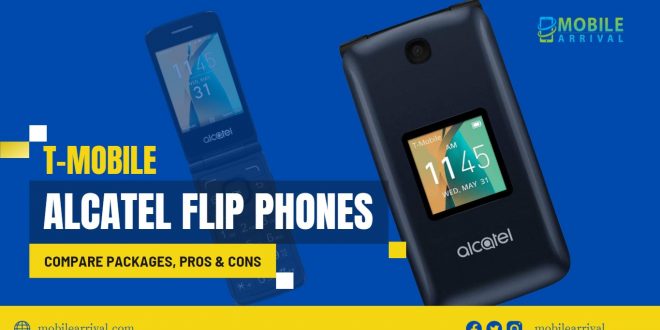 We picked the 5 best Alcatel T-Mobile Flip Phones models. Also, discussed in the detailed bout its packages, features, Pros & Cons. This article will help you to decide which Alcatel flip phone you should have.

Flip phones used to be popular phones before. When the smartphone came into the market, its popularity decreased. But it is still popular among senior citizens. A lot of people still use a flip phone beside a smartphone. Even parents who want to give their kids a communication device prefer a flip phone.

These phones are easy to use as there are not many functions. They are more durable than smartphones. They are highly affordable. These are the main reasons why flip phones are still preferred by so many people.

For the T-Mobile users, you might be facing the locking issue and searching the solution of “How to unlock t-mobile for free”. Here are the ultimate multi-fixing methods of unlocking t-mobile free or paid.

Flip phones now also have advanced many things in their system. Now you can see a 3G or 4G connection in a flip phone. Flip phones now have GPS, high-speed internet, and some can connect to wifi. These phones have long-lasting battery life than a smartphone. Because they can do only a few things, they do them very well. They can give you better connection and sound during a call and massage than a smartphone. The main thing is they come at a very cheap price.

If you are a smartphone user, you can also have Alcatel T-Mobile Flip Phones. In public, using a flip phone will be much safer than a smartphone. You won’t be targeted by the robbers that way.

Now that most people use smartphones, the phone manufacturers only make smartphones. So, finding a good flip phone with good function and price is hard. That’s why we did our best to make this list for you. Here we included the best flip phones that you can consider buying.

Now the details about these phones.

It was released on November 10, 2017. The best thing you get here is it is a 4G phone and has HD voice capability meaning the sound during a phone call will be very clear.

Now 5G is starting to spread all over the world. Network providers are focused on giving you the best high-speed network. In the meantime, they are decreasing service for 2G, and they will do that to 3G too. It will be a good thing to choose a 4G phone and Alcatel Quickflip 4044C is a 4G phone.

The phone’s design is simple and very nice looking.

Display: It has 2 displays, an internal one and an external one. The internal display is 2.8inch, and the external one is 1.4inch. The exterior display will show you the time, date, and name when someone is calling.

Camera: Only a 2MP camera. Enough to take photos of things like recipes, places, or objects. bestThe video quality is not very good. You can record a 240p QVGA video. It’s not a camera phone, so it doesn’t matter that much.

Other things: It can be connected to Wi-Fi and Bluetooth. It has a headphone jack and a Micro SDcard slot that you can’t get in a flagship phone now.

It already has 4GB internal storage where only 1GB can be used. You can use a micro SDcard as external storage. It supports Micro SDcard up to 32GB. Though you will not need that much for a phone like this.

Battery: It has a removable 1350mAh battery, enough to give you a minimum of 8 hours of voice talk time.

Usability: It will work with AT&T and T-mobile.

It is the same as the before one with a little bit of improvement. It is also a 4g phone but it doesn’t have HD voice compatibility. The design is also the same as the Alcatel Quickflip. The keypad is big enough for the elderly to see and use easily.

Camera: Even though you have the same 2MP camera, but now you can record 720p videos in 30fps. The quality of videos is not very good but not bad either. You can’t expect a good camera at this price.

Other things: It has Wi-Fi and Bluetooth. It has a 3.5mm headphone jack and a micro SDcard slot. There is 4GB internal storage in this phone, but only 1Gb is usable. You can use a 32GB SDcard if you want.

Battery: It comes with a removable 1350mAh Li-ion battery. It can give you at least 8 hours of backup.

It was launched on September 15, 2015. You can say that it’s a very old phone and the design also reminds you how the old phones used to look.

Because it is an old phone you don’t get 4G here. It is a 3G phone. But it is also a popular flip phone.

Display: It also has 2 displays. The internal display is 2.4inch and the external display is 1.1inch. The exterior display only shows the charge bar, network bar, and massage and headphone icons. It doesn’t show the date and time like the other ones.

Camera: It has a 2MP camera. But the pictures are sharp enough to use.

Other things: It has Bluetooth. It also has a 3.5mm headphone jack and a micro SDcard slot.

Though it has 128MB internal storage, you can increase the storage to up to 32GB using a micro SDcard. Internet is also accessible.

Battery: It comes with a removable 850mAh battery. It will be enough for a long battery backup. Because it has a small display and is a 3G phone which consumes less charge than a 4G phone.

Another simple-looking yet colorful flip phone for the elderly. It is a 3G phone. It also has dual sim support where sim 1 is 2G and sim 2 is 3G. The thing that is best about this phone is, it comes with a charging base. For the elderly, it will be helpful to charge their phone by just putting it on the charging base.

The design is also very classic. The buttons are big and soft for kids and the elderly to use.

Other things: It has Bluetooth. It has a 3.5mm headphone jack and micro SDcard slot. It comes with 128MB of internal storage, but you can add up to 16GB with a micro SDcard.

Battery: It comes with a 1200mAh battery. It will give a long-lasting battery backup. According to them, it will give you 5 hours of voice talk time in one charge.

It is a 4G flip phone. It has a simple design and big buttons that make it easy to use for the elderly.

Display: Again it has 2 displays and the main one is 2.8 inches while the external one is 1.7inch.

Camera: it has a 2MP camera. You can use it to take some normal pictures and videos.

Other things: It has Wi-Fi and Bluetooth. It also has a 3.5mm headphone jack and micro SD card slot that supports a maximum of 32GB SD card. You are getting 4GB internal storage too.

Battery: it’s a 1400mAh battery. It is the biggest among all of these phones. It will give you a minimum of 6 hours of talk time.

These are the best T-mobile flip phones that are available now.

If you are a person who needs to call and massage a lot most of the time, then you can use a flip phone as a backup. Flip phones will not only give you great phone call quality but also great battery life. After charging these phones once you don’t have to worry about recharging them for a couple of days.

Can I Install Whatsapp in Alcatel T-Mobile Flip Phones?

No, you can’t install any apps on these phones.

Can I add other ringtones to Alcatel’s T-Mobile Flip Phones?

Yes, you can download and set that ringtone by going to settings. You can also do this by downloading on PC and then transfer that to your phone using SDcard.

What kind of charger do Alcatel Flip phones use?

Yes, Except for Ushining 3G and Alcatel One Touch 768t.

Can Alcatel Flip phones be used with Sprint or Verizon?

o, they only work on T-mobile and AT&T.

Mobile Arrival is an aspiring blogger, a gadget and smartphone geek, and a motorcycle enthusiast. He dreams of starting his own motorcycle and travel blogs and tech youtube channels someday.
Previous Latest Phones 2021: 5 Best Smartphones In The US Right Now
Next Top 3 Best Straight Talk Flip Phone: Prepaid Plans and Packages