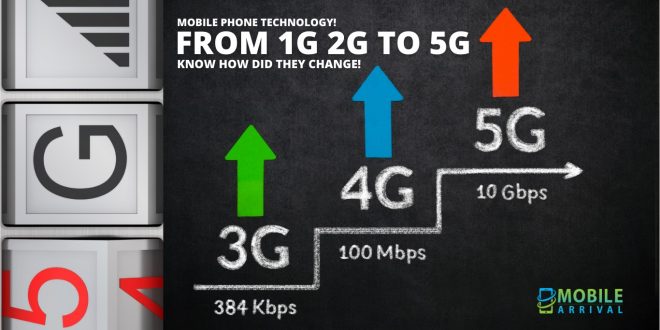 From 1G 2G To 5G upgrading history. Currently, Indian smartphone users are eagerly waiting for 5G. In the country, 5G experiments have been permitted, and telecom providers have also picked spectrum.

It is expected that by the end of 2021 or early 2022, the active use of 5G technology will start in India. But did you know about network and mobile technology before 5G?

Today we will try to explain to you in very simple language through this post what has changed in the field of mobile technology with each generation.

We are going to tell you the journey from 1G to 5G without talking too much technical and without using big words.

The first mobile phone was launched in the 1980s as 1G.

The technology that the general public was interested in getting their hands on then did not even know that in the future it would be called 1G.

Many of you may have seen movies or other places where mobile phones with long antennas were available in earlier days.

At that time, of course, more speed was not needed, because human data was of no use. In addition to speed, another major drawback of this generation was massage.

No messages could be sent from these phones. With the help of this technology, the phone could be used not only digitally but also in analog mode.

Back then, only analog signals were exchanged on the phone, and voice calls were made through it. However, SMS was not possible with this help.

2G came to the market in the ‘90s to meet the needs of first-generation phones. The data speed improves to 64kb / s, or 64 kbps per second, with the assistance of these technologies.

Although this speed is not very high, the lack of SMS of the previous generation eliminates this technology. Using 2G technology, mobile phone users can enjoy voice calls as well as SMS features.

The movement of SMS started with the help of the 2G generation. And, there was a period when you were required to spend upwards of Rs 3 for an SMS, with another text restriction.

Also, this technology can make the mobile phone compact enough and phone users could keep this phone in their pocket. This is the first time the image has been exchanged, but both the media quality and the transfer speed were very low.

In the third generation of mobile phones, the network speed exceeds kilobytes and reaches megabytes. Between 2003-2004, 3G spread completely, and then the use of multimedia in mobile phones started.

In other words, this generation further expands the scope of voice calls and SMS. With the advent of 3G, mobile phones could get speeds of up to 2MB / s, up to 2MB per second.

Using 3G technology, you can enjoy voice calls and SMS as well as the internet on your phone. From this time on, social media platforms like Facebook and video streaming apps like YouTube started coming to the market.

But due to the low speed, YouTube and similar services had to face buffering. HSPA + and HSPA Turbo versions are introduced to solve this problem, resulting in speeds up to 42 Mbps.

4G LTE and 4G VoLTE were brought to the market with further evolution in this generation. In addition to voice calls, SMS, and internet browsing, the video call feature comes to the phone at this time.

In the beginning where voice calls were made using analog signals, now the era of voice calls through the internet band has passed.

4G network: Internet speed increases to 100MB / s, that is, 100MB per second. 4G mobile technology can be called the biggest improvement because it opens up a lot of roads to the future and gives a new glimpse of the future.

In the age of 4G, multi-device connectivity of mobile phones became possible. All the smartphones that I or you are using today are 4G smartphones.

Currently, the maximum speed of the 4G network is 600 Mbps.

5G has been launched in the world and trials are underway in India. Shopping for 5G phones is already underway in the country and the 5G network will be available by next year.

In the case of 5G, the internet speed will go up from megabytes to gigabytes and it will be able to enjoy at least 100 times the speed of 1 Gbps i.e. 4G.

5G technology can connect not only mobile phones but also bulbs, fans, fridges, and cars with 5G.

IoT will have considerable importance in 5G and the biggest advantage of this technology will be that all devices and appliances will be able to connect.

You can control any device at home with the command from your phone, even from a faraway city or country.

In other words, you can increase or decrease the temperature of the fridge or AC by turning on or off the lights in the house in Dhaka through the phone while sitting in Kolkata.

Mobile Arrival is an aspiring blogger, a gadget and smartphone geek, and a motorcycle enthusiast. He dreams of starting his own motorcycle and travel blogs and tech youtube channels someday.
Previous 5 Great Ways to Remove Scratches from Smartphone Screen (DIY)
Next Easy Way To Transfer Contacts From Old Phone To A New Smartphone