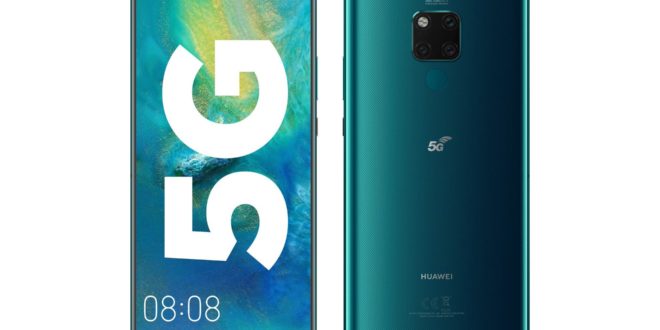 Huawei Mate 20 X 5G will debut in China in the month of July. At the end of the last month, Huawei claimed that the handset had obtained China’s first 5G terminal telecom equipment network access license. It also confirmed that the Mate 20 X 5G will support SA and NSA 5G networks. The images appeared on TENAA which indicates that the release date of the smartphone is close by.

Now, in order to make space for the several 5G antennas, Huawei has removed the 3.5mm headphone jack. It also packs a lesser capacity battery – 4200mAh which is ~19% reduction in capacity compared to the 4G variant. The 5G variant also lacks stereo speakers. But, the 5G Variant gains the 40W Supercharge Charging technology as against the 22.5W fast charging of the 4G variant.

In terms of looks, the Mate 20 X 5G is similar to the 4G variant but now comes with a new Emerald Green color with a 5G logo. According to PhoneArena, the Huawei Mate 20 X 5G can achieve speeds of roughly 694mbps and an upload speed of 37mbps in Vodafone’s 5G network in Spain. On 4G that speed ranges from 30-35mbps of download and 10-15mbps of upload speeds.

The Mate 20 X 5G packs a FullHD+ 7.2-inch OLED display with a waterdrop notch. In the UAE the 5G variant comes with 8GB of RAM and 256GB of storage. The phone runs EMUI 9.1 atop Android 9.0 Pie. It features a 24MP camera at the front, while the rear sports a triple; a 40MP primary sensor, a 20MP ultra wide lens, and an 8MP telephoto lens with 3x optical zoom.

Mobile Arrival is an aspiring blogger, a gadget and smartphone geek, and a motorcycle enthusiast. He dreams of starting his own motorcycle and travel blogs and tech youtube channels someday.
Previous Best Smartphones of 2019 – MobileArrival’s pick
Next Sony WF-1000XM3 wireless noise-canceling earbuds unveiled