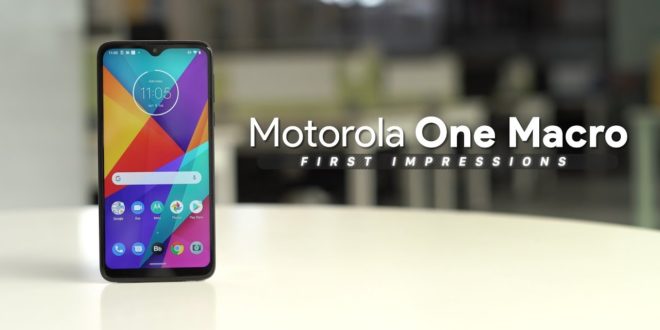 Motorola One Macro|Has the time for phone macros come?

If you’re planning to buy a smartphone and your budget is under Rs.10000 (approx. $140) and you are looking for a camera-centric smartphone, look no further. Motorola has just released the Motorola One Macro. While most of the Moto family is made up of mid-rangers, this one is just an entry-level device like the E-series.

This device comes in only one variant. That is the 4GB RAM and 64GB of storage variant. Though the sadder part is that it comes with a hybrid card slot, meaning you have to choose between having both your SIMs or having a single SIM and a Micro-SD card.

The phone features a 4,000mAh battery. Which looks like a nice deal for a budget-oriented smartphone. It also comes with a USB Type-C port and supports 10W Fast Charging. The company claims that the phone can last 2 days of casual usage. It comes with a 3.5mm headphone jack. Lastly, the Moto logo at the back acts as the fingerprint sensor.

Motorola One Macro | The Main Highlight

The main highlight of this smartphone is the Macro Lens camera. It can focus from as close as 1 inch. It uses a 2MP sensor with 1.75µm pixels. For regular taking shots it comes with a 13MP main camera with an f/2.0 lens that has a pixel size of 1.12 µm pixels. It can record videos at 1080p at 60fps and slow-mo at 120fps. The phone also comes with a Laser AF system to help you focus on the object.

The Moto One Macro also has an additional 2MP depth sensor for taking portrait photos. Although neither a telephoto lens nor a wide-angle lens is provided. It has become common practice to put these cameras as a basic feature in every other upcoming smartphone. The High-Res Zoom helps to improve the quality of the zoom by collecting multiple frames to avoid blurry images.

The front-facing camera features an 8MP shooter with a waterdrop notch. Considering the price of the phone, it is very basic and not so impressive. But let’s hope it gets an update to make it take clearer and crisper pictures.

The Motorola One Macro is launching on October 12 in India at Rs.9999 (140$). The launch in India will be followed by a global launch, bringing the phone to Europe, Latin America and the US.

Previous Google Pixel 4 Updates | Release Date, Price, and leaks.
Next OnePlus 7T Pro Launched with Snapdragon 855 Plus along with the Special McLaren Edition