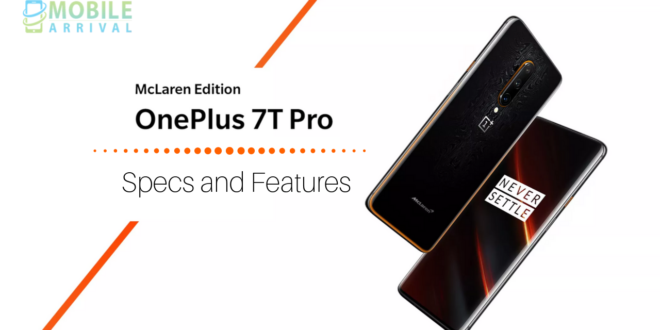 Previously, OnePlus updated their OnePlus 7 to OnePlus 7T, which bought a lot of improvements to that latest successor, but OnePlus 7 Pro left behind and the company fixed that with the launch of OnePlus 7T Pro. Although we don’t get a lot of improvements with this system in terms of specifications other than processor and cost. OnePlus also added a special edition to this series called OnePlus 7T Pro McLaren Edition, before we dig deeper, let’s see what’s going on under the hood.

OnePlus 7T Pro comes with Snapdragon 855 Plus, which is estimated by the company to provide 15 per cent higher graphics performance compared to the predecessor. Due to the higher clock speed, this processor will accommodate the 90Hz display, making the gameplay smoother than ever before. Although I’m sure it will fall behind when it comes to the newly launched Asus ROG Phone 2, which features a 120Hz screen.

The other major change is that the unit now supports Warp Charge 30T. It is about 23% faster than the 30W adapter. Although the peak power is not greater, the new charger stays its foot on the throttle longer.

Every other thing stays unaltered as the predecessor. That includes the triple camera setup highlighting a primary 48MP Sony IMX586 sensor sitting behind an f/1.6 lens. Subsequently, there’s another 16MP f/2.2 ultra-wide lens. Finally, there’s a 12MP f/2.2 telephoto lens with a 2x optical zoom. At the front is a 16MP pop-up selfie camera, and a fluid curved AMOLED display continues as before.

The OnePlus 7T Pro McLaren Edition comes with 12 GB of RAM and 256 GB storage. The McLaren Edition was first released with OnePlus 6T and its back with a symmetrical wood grain look as well as the signature McLaren papaya yellow paint on the sides of OnePlus 7T Pro. You’ll also get a soft Alcantara shell, which is common in the automotive world.

Both the Regular and the McLaren Edition phones will launch with OxygenOS 10, which is based on Android 10.

The McLaren Edition includes some exclusive features, such as McLaren-themed wallpapers and icons, as well as updates highlighting the rounded sides of the screen in the orange papaya trademark.

The OnePlus 7T Pro will go on sale in Europe starting from Thursday at €760. It is priced similar to the 8/256GB variant of its Predecessor. The McLaren Edition is coming up on November 5 with a price tag of €860.

Previous Motorola One Macro|Has the time for phone macros come?
Next Huami Amazfit GTS launched in India at INR 9,999