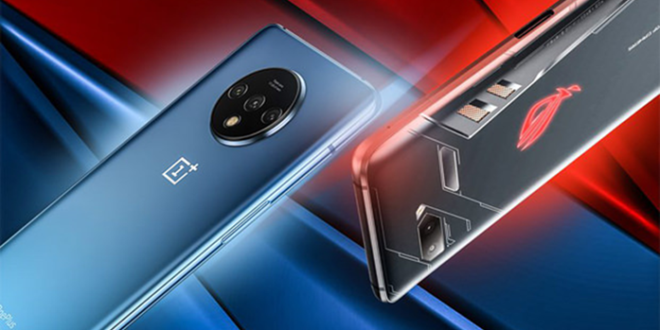 OnePlus has recently turned up the heat on the Asus ROG Phone II with the launch of the OnePlus 7T. The 7T has the same internal specifications as the ROG Phone II, albeit at a lower price. The Asus ROG Phone II was announced earlier this year and launched very recently. And although they might have similar specs and their base variants cost the same, the higher-spec variants differ significantly in price. Below is a OnePlus 7T vs. Asus ROG Phone II comparison chart. Read on to find out.

On the other hand, the Asus ROG Phone II gets a 6.59” 1080×2340 FHD+ AMOLED display as well. You won’t be able to find any notches on the ROG Phone II. And while the pixel density might stand at ~391ppi, the refresh rate though gets bumped up from 90Hz to 120Hz and the display is HDR10 compliant. The color gamut coverage for DCI-P3 also goes up slightly to 108%.

The OnePlus 7T is made with an all-aluminum frame sandwiched between front and back glass cladding. The Asus ROG Phone II also follows the same glass and aluminum sandwich like the 7T. The difference though is not in the construction but rather the aesthetics of the two. One is a ‘Flagship Killer’ while the other is a full-blown “Gaming-Centric” Smartphone. As such they are both much alike but very different in the design-aesthetic regard.

Upon inspection of both the devices, you’ll see that the ROG Phone II to much relief, features a 3.5mm headphone jack. Whereas, the still widely used legacy connector is nowhere to be found on the OnePlus 7T, which is kind of a setback. After all, what would you do if you owned a couple of nice wired headsets like me?

The OnePlus 7T and Asus ROG Phone 2 share the same heart – Qualcomm Snapdragon 855+. That coupled with Ultra-Fast Storage, Overclocked Adreno 640 and the fastest memory makes for an ultra-fast buttery smooth experience. The highest variants of the devices are –

The one major difference between these two devices is that the ROG Phone 2 has Air Triggers, supports accessories that provide for better cooling and gaming. Whereas, the 7T doesn’t have any of that fancy gamer stuff.

The software though is another difference. The OnePlus 7T comes with Oxygen OS on top of Android 10 while the ROG Phone II comes with Asus’s custom ROG UI based on Android 9 which is gamer-centric.

Both the OnePlus 7T and Asus ROG Phone II pack some serious camera hardware. But do they deliver? The 7T has a 16MP Primary Sensor at f/1.6 aperture, while the telephoto and ultra-wide sensors have an aperture of f/2.2 and are 12MP and 16MP respectively.

The primary sensors being 48MP on each of the devices produce some very sharp looking images. Although what’s not so good though is the white balance on the 7T that results in some color difference. The images have a bluish tint that looks weird and is noticeable. In the case of low-light photography, the 7T just about makes the mark with better low-light performance and warmer details, thanks to OIS and EIS. The ROG Phone II doesn’t get OIS or EIS which impacts its low-light capabilities.

The portrait mode on the ROG Phone 2 has better, warmer details with natural colors whereas the 7T gives off more artificial light and bright colors which is a bit off a disappointment.

In Video Recording, the 7T has a super stable mode which makes use of the OIS and EIS to record video in 1080p. Both the devices have EIS but the 7T get the added benefit of OIS when recording at 4K which the ROG Phone II doesn’t get. As for the front camera, they both have 32-megapixel camera which has both their advantages and disadvantages too so there is no difference. Coming to selfies, the 7T sports a 16MP sensor at f/2.0 while the ROG Phone II gets a 24MP sensor at f/2.2. The 7T’s front camera features gyro-EIS though.

The OnePlus 7T gets a modest 3,800mAh battery when compared to the monstrous 6,000mAh battery in the Asus ROG Phone II. The ROG easily outdoes the 7T in battery life.

Both the phones get 30W fast charging but only the OnePlus 7T comes with a 30W charging brick. The ROG though get an 18W fast-charger in the box for the base model, the upper variant though should come with the stated 30W fast-charging brick. Due to the bigger battery, the ROG Phone II takes up almost double the time to reach a 100% charge.

If it’s a powerful everyday phone you seek which also happens to be gaming-centric, the Asus ROG Phone II is for you. But if you happen to be like me, who doesn’t like playing games on their phone but rather an everyday phone that just works, the 7T is for you. Bonus Fact: Oxygen OS is faster, smooth, lighter and gets updated more frequently than the ROG UI sporting ROG Phone II. Clearly you are starting to notice a pattern here despite the ROG Phone acing the battery life test?

The OnePlus 7T makes for a more valued and rounded proposition than the Asus ROG Phone II. So, what ‘ll you choose?