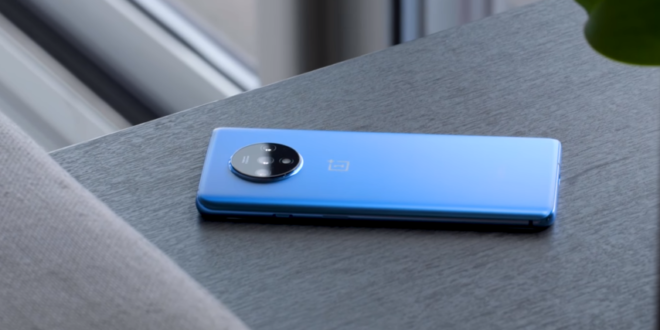 OnePlus 7T Review | How much of an upgrade is it?

OnePlus unveiled its next-generation flagship to the whole world at a launch event in New Delhi. The launch of the OnePlus 7T was accompanied by the OnePlus Smart T.V, which too is a premium product. The OnePlus 7T offers everything you would expect a flagship to offer in 2019 – a 90HZ AMOLED display, the latest Snapdragon chipset, triple cameras, even faster charging, and the lot. Now, let’s take a deeper plunge into the specifications.

Unboxing the OnePlus 7T | In the Box

Recently, OnePlus has been paying a lot of attention to its packaging. Apart from using more robust cardboard materials, OnePlus has also made the entire box out of a distinct red color that is distinguishable against any background. The box itself is longer – symbolic of the longer 20:9 aspect ratio of the display.

Now let’s have look at what’s inside the box –

The design of the OnePlus 7T is ultimately a refined iteration of the OnePlus 6’s. With the 7T, the company has enlarged the display to 6.55” and made the notch significantly smaller. The fact that the phone doesn’t have a curved display makes for a compelling debate on whether curved displays on flagships are useful or just glorified design. Whatever may be the case, you would enjoy the buttery-smooth 90Hz display without the curved edges.

The company has been onto using matte-finish on its phones for some time now. The 7T’s rear glass has the same tasteful matte-finish, albeit in new gradient colors. The OnePlus 7T now comes in two colors – Glacier Blue and Frosted Silver.

Sprucing up the rear of the phone is an all-new Circular camera bump that sports the triple cameras, arranged horizontally. The frame itself is made up of polished metal that is meatier and easier to hold on to. The button placement is nice too since the power key and volume rockers are at the right distance from the bottom.

The SIM tray location has also changed on this phone, that is from the left to the bottom of the phone. That, in turn, has helped to add more punch to the front-facing speaker than the 7 Pro. The included case is a nice touch. It also comes with an improved Haptic motor which provides more accurate and satisfying feedback.

Display | Fluid is the emphasis here!

The display on the OnePlus 7T is by far the best update. The 90Hz display which the company calls the ‘Fluid AMOLED display’ is also bigger and longer. Everything feels far smoother and snappier overall. The animations too are more immersive while the transitions are mesmerizing too. The 7T also has an updated brighter panel which with Adaptive Brightness enabled gets to ~743nits, while with the setting turned off that is around ~525nits. The resolution stays at 2400 x 1080 px, meaning there’s still no sign of a 2K display.

The 7T supports sRGB and DCI-P3 color spaces, and a wide-gamut mode. Then there are the ambient light and proximity sensors that are hidden behind the display, just below the camera notch. As such, you’ll never be able to spot them with the display on.

The OnePlus 7T has a marginally larger 3800mAh battery. That coupled with the larger screen size and increased refresh rate has some considerable impact on the battery life of the OP 7T. Now combine that with the updated 30W Warp Charge that results in shorter and faster top-ups between charges. The 30W charger now pushes 6V/5A that is now possible with the use of graphene components.

Performance | The Fastest OnePlus Ever

The chipset is one of the major areas that has received a healthy dose of generational power bump. Adorning the Snapdragon 855+, which is essentially a factory OC-ed chipset, the OnePlus 7T packs roughly 15% more raw firepower.

The Chipset is an Octa-Core unit with 4 low-power and 4 high-power cores. The Prime core of the cluster is clocked at 2.96Ghz (up from 2.84Ghz of the 855’s), while the high-power cores sit at 2.42Ghz. The 4 lower power cores are clocked at 1.8Ghz. Then there’s also the Adreno 640 GPU which is ever so slightly overclocked by 100Mhz.

Software | The most fluidic Oxygen OS ever

The OnePlus 7T will be running Android 10 out of the box with its custom Oxygen OS skin atop. This should make it one of the first devices to be shipped with the latest version of Android. Every passing iteration of OnePlus’s Oxygen OS somehow gets smoother and snappier. This one no exception with the latest implementation.

Cameras | Will you settle for this?

Below the primary camera, sits the dual-LED flash. The primary camera features OIS and EIS which in turn facilitates more stable video recording at up to 4K 60fps. It also supports 960fps Slo-Mo video recording at 720p. OnePlus also debuted its new Super Stable video recording feature along with the new Ultra Shot Engine to provide better landscape and backlit images. Then you’ve got all the necessary camera modes – Nightscape, Ultra-wide, Portrait, Pro mode and other that were already present in the previous models.

The phone which was globally unveiled in New Delhi has 2 variants:

It will go on sale on September 28th on Amazon.in.

The question that begs after all this is if this is a proper upgrade worthy for the 2019 flagship killer title. Short answer – NO. It is not a successor to the OP 7 or OP 7Pro, rather a price gap filler between the two. Is it worth buying? Absolutely. For what you get at the price point is a very good price to performance ratio that is not matched by the like of other manufacturers at such a price point.

Mobile Arrival is an aspiring blogger, a gadget and smartphone geek, and a motorcycle enthusiast. He dreams of starting his own motorcycle and travel blogs and tech youtube channels someday.
Previous OnePlus TV | A New Segment Leader in the making?
Next Amazon’s Great Indian Festival & Flipkart’s Big Billion Days Starts Tonight