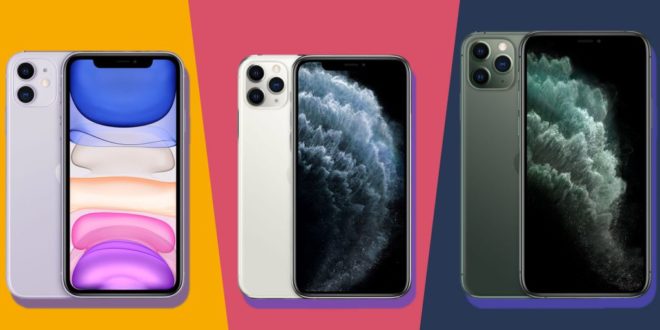 Apple has announced a series of new smartphones, iPhone 11, iPhone 11 Pro and iPhone 11 Pro Max. They’re all budget phones, but they’re all loaded with different features, prices, and screen sizes, among other factors.

As such, although their models are identical, there is a lot to choose between them. With that in mind, we compared the three 2019 iPhone models, so you can see exactly what’s the same and what’s new.

These three new iPhones are essentially of the same model, and it’s also a design identical to the iPhone XS range. This is especially true from the front, as they have a big notch at the top but an otherwise all-screen design.

The iPhone 11 series also has a metal frame (aluminum for iPhone 11, stainless steel for the other two) and a glass back. But that back is where the biggest differences–both from the XS and from each other–can be seen, as the cameras are now grouped in a square block in the top left corner.

The three phones, however, have water resistance, albeit at a depth of four meters for the Pro versions and just two for the regular iPhone 11.

The colors are also different, with iPhone 11 Pro and iPhone 11 Pro Max available in Gold, Space Gray, Silver, and Midnight Green tones, while the iPhone 11 is more vivid in Orange, Purple, Red, Green and White shades.

The OLED displays are called’ Super Retina XDR’ and should be superior to the LCD one, and in all situations, this is the same setup as the previous models–although there are changes in the performance of the display. For starters, the iPhone 11 Pro and Pro Max have a contrast ratio of 2 million to 1 and a peak brightness of 1,200 nits.

The three phones have a night mode, 4K video recording up to 60fps, and a whole range of other features that are mostly the same across the devices.

We’re going to let you know how the new models hold up in practice once we’ve put them through a full review.

As far as charging is concerned, predictably wireless charging is enabled, as is fast charging, with all three devices supposed to be able to juice by 50 percent in 30 minutes – although it requires an 18W adapter that comes in the Pro model box but is sold separately for the regular iPhone 11.

In news that won’t surprise anyone, all three new iPhone handsets are running Apple’s A13 Bionic chipset. This will be the next iteration after the A12 Bionic in the iPhone XS series.

According to Apple, the A13 has the fastest CPU and GPU ever used on a smartphone. What we don’t know is how much RAM the range has – it is never announced by Apple, but don’t be surprised if the iPhone 11 has less than the other two versions.

You can’t buy any of these devices yet, but you’re going to be able to pre-order them from September 13th, with these hitting shelves and excited hands on September 20th.

As anticipated, the iPhone 11 Pro Max appears to be the most impressive of these handsets–at least on paper. It’s got the biggest screen for one. The iPhone 11 Pro falls below, mainly marked for its significantly smaller screen. Otherwise, it ought to be just as much of a flagship.

Then there’s the iPhone 11, which is in the middle of the screen size but at the bottom of the screen for the overall specs and features, with fewer camera lenses and LCD instead of OLED.

There’s no surprise how these phones stack up, though, and prices reflect their positions. We’ll let you know how good with full reviews coming up soon.

Mobile Arrival is an aspiring blogger, a gadget and smartphone geek, and a motorcycle enthusiast. He dreams of starting his own motorcycle and travel blogs and tech youtube channels someday.
Previous iPhones could use the Apple Logo as a LED notification light in the future
Next Apple iPad mini 2019 Review | Zero competition