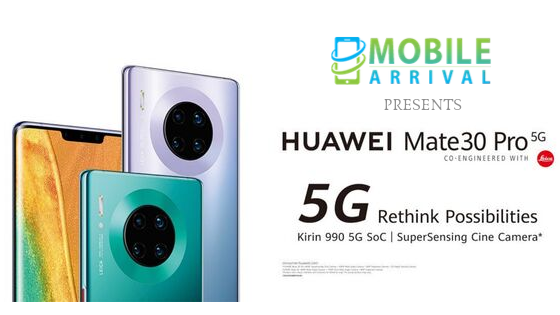 Huawei has just unveiled their new flagships – The Huawei Mate 30 and Mate 30 Pro. And though the presence of the US-China trade war has taken some toll on Huawei, they still pressed on with the launch. The company also revealed its plans for a future without Google.

The Huawei Mate 30 Pro boasts of the most impressive camera hardware setup of any smartphone, ever! It features the same 40MP Super Sensing camera from the P30 Pro. It also gains a 40MP ultra-wide camera named the Cine Camera by Huawei. Both the cameras can use the 3D ToF sensor to render bokeh in videos. Both the 40MP sensors are physically large and feature wide-open apertures. The main camera features a 1/1.7” -type sensor with an aperture of f/1.6, while the other has a 1/1.54” -type sensor with an aperture of f/1.8.

The 3rd camera at the rear is an 8MP sensor with a 3x Optical Zoom lens (80mm focal length) which also does 5x hybrid optical zoom. The P30 Pro, for comparison, has a 5x Optical and 10x hybrid zoom lens. Both the telephoto and wide-angle cameras have OIS.

Video recording is equally remarkable with support for 4K 60fps video recording (a 1st from Huawei). Frame rates can go even higher with slow-motion video capture. The phones can do a mind-numbing 7,680fps at 720p, while another really exciting thing to try out is the 4K time-lapse with HDR+ colors. Oh! And by the way, for shooting in low light, the video camera can go up to an astounding ISO 52,000!

The phones feature a 32MP selfie camera placed right next to the new 3D scanning hardware. Then there’s a dedicated sensor for recognizing hand gestures. This all works in alliance with Huawei’s in-house Da Vinci NPU.

Speaking of performance, the Kirin 990 chipset. That’s what is underneath these behemoths. The chipset is built on a 7nm+ EUV process and features the Mali-G76 MP16 GPU with an upgraded Turbo algorithm. A graphene film moves the heat away from the chipset.

The Huawei Mate 30 Pro features a 6.53” display with a wild 88° curve on both the sides. Huawei calls this the “Horizon Display” design. It is an OLED panel with a resolution of 1,176 x 2,400px, full coverage of the DCI-P3 color gamut and naturally, HDR. The display features an Always-On Mode and it also now supports the M-Pen stylus (4,096 levels of pressure).

Since the display pretty much covers the whole side of the phone, Huawei has placed a number of virtual buttons – from volume to shutter key buttons. Both the Mate 30 phones run EMUI10 atop Android 10.

Both the phones now feature Huawei’s new SuperCharge technology. It can now push up to 27W into the 4,500mah battery wirelessly, whereas, the wired charging remains at 40W.

Huawei boasts of 21 antennas in total in the phone. 14 of the antennas are dedicated to 5G which allows the phone to support up to 8 5G bands. There is also going to be a 4G version for markets which still lack the latest generation carrier networks.

The Huawei Mate 30 Pro comes in the following variants:

There is an NM card slot which should help you to expand up to an extra 256GB. The following color variants were announced:

The phone is IP68 water-resistant. Below is the pricing of the variants:

Shipments in China are to start on the 28th of September, while Global availability is supposedly coming in October. Although we’re yet to see if the global markets accept a phone with no Play services running.

Mobile Arrival is an aspiring blogger, a gadget and smartphone geek, and a motorcycle enthusiast. He dreams of starting his own motorcycle and travel blogs and tech youtube channels someday.
Previous Redmi K20 Pro Coming with An Exclusive Edition | What’s So Exclusive?
Next India’s most-loved Redmi A Series is back with another successor Redmi 8A