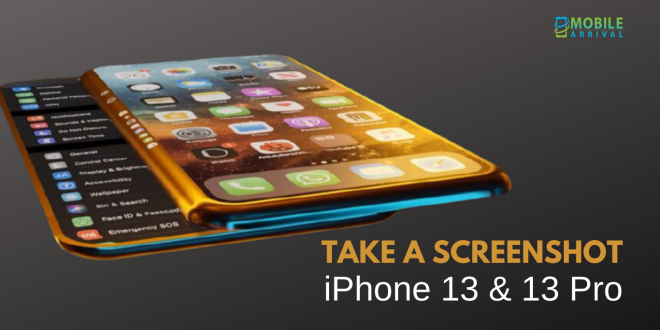 Are you searching for how to take a screenshot on an iPhone 13 or iPhone 13 Pro? Then you come to the correct web page.

Do you have the new iPhone 13 or iPhone 13 Pro? Getting a screenshot on your new iPhone may be a bit confusing if you have an old iPhone.

The iPhone 13 Pro does not have a home button, so taking a screenshot is unlike previous iPhone models.

The iPhone 13 upgrade process will feel familiar if you upgraded from an iPhone X or newer.

Taking screenshots is a bit different on the iPhone 13 and iPhone 13 Pro due to the absence of a home button.

Step 1: Press the Volume Up button and the Side button at the same time.

You can wake your iPhone 13 Pro by simultaneously pressing the Side button and the Volume Up button. Once you let go of the buttons, you will be able to take a screenshot.

The Screenshot can be annotated and edited using text, signatures, arrows, and more. Just tap on it.

Cropping the Screenshot is also possible from here. Put your iPhone on mute to muffle the screenshot sound.

The preview appears in the bottom left corner of your screen if you wish to edit, mark, or otherwise alter your Screenshot.

You can also mark up the top of the Screenshot from here and make various adjustments.

Among the options for cutting out are a lasso, marker, pencil, rubber, and various pens.

Using the “+” symbol will also give you more tools, such as Text, Signature, Magnifier, and predefined shapes such as circles and squares.

You may also like: What’s New Features On iPhone 13 Series | Do you Know?

By tapping and holding on to the preview, you can send the Screenshot directly to an application of your choice.

As well as dismissing the screenshot preview, you can also turn it off. You will automatically be able to view the Screenshot in the Screenshot album in the Photos app.

Click – Done at the top left of the screen to save or delete the Screenshot at any point.

There are two options on this screen: Save to Photos and Delete Screenshot.

By pressing the Share icon and choosing the appropriate service, you can share or save the Screenshot with others.

If you do not want the Screenshot after saving it or sending it, click on the “Done” button.

It offers a convenient way to access your most frequently used iOS menus.

With Assistive Touch, even more, people can take screenshots with just one hand.

You can enable Assistive Touch by going to Settings >> Accessibility >> Touch >> Assistant Touch and then selecting it.

The screen will become semi-transparent and have a button. That button is your Assistive Touch button.

To customize the top-level menu, tap the Customize button.

Choose a Screenshot from the list of Custom icons (the ones with stars).

An Assistive Touch menu button for screenshots will be added.

Step 3- Use Assistive Touch to capture a screenshot.

Take a screenshot with Siri on the iPhone 13

Apple’s iPhone 13 comes with Siri, which allows you to take a hands-free screenshot.

Long-press the Side key or Power button to access Siri with the ‘Hey Siri’ voice command.

An improved Siri interface means the assistant has received your command.

With the help of Siri, you can take a screenshot. In the bottom left corner, you’ll see a preview.

It will open the recently added photos menu when you ask Siri to open the Photos app.

Are you looking for another tip?

A handy tip worth knowing about taking screenshots from a Safari page can come in handy.

Taking a screenshot of a full-page website is as simple as following these steps:

How to View Screenshots on the iPhone 13 and 13 Pro

You can easily access your Albums by tapping the Photos tab in the app. The Screenshots album is under Media Types, so scroll down to get there. The Recents menu in the Photos application also provides access to all screenshots.

I usually take screenshots on my iPhone using the Power and Volume Up buttons together. In addition, I can ask Siri to do the screenshot work for me when my hands are full.

The iPhone 13 Pro and iPhone 13 Pro Max both have the option of taking a screenshot. If you could choose, which one would you use? Feel free to speak your mind below in the comments.

Take a Screenshot on the Samsung Galaxy Note 20 Ultra

Mobile Arrival is an aspiring blogger, a gadget and smartphone geek, and a motorcycle enthusiast. He dreams of starting his own motorcycle and travel blogs and tech youtube channels someday.
Previous How To Turn On And Off Android Developer Options | 3 Easy Steps
Next Do Your Mobile Phone Get Wet During The Rainy Season? 3 Pro Tips